The event provided a platform for Tower Transit Singapore to showcase its new depot, while educating the public on what to expect when the BCM kicks in from next year. In addition, static display buses were open to public viewing, and job-seekers could sign up for job opportunities with Tower Transit. 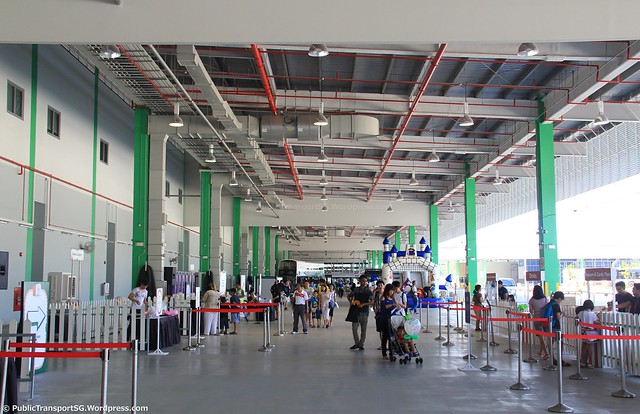 Tower Transit was first established in London and Cambridge where it operates 650 buses, employs 2,000 people and carries over 115 million passengers a year. It was shortlisted for the title of Bus Operator of the Year in the 2015 London Transport Awards. It is a sister company of Australia’s leading Transit Systems Group which has over 19 years of operating experience with tendered government contracts in Australia. It now operates over 1,000 buses, employs more than 2,000 people and carries over 55 million passengers per year.

The company entered the Singapore bus scene when it bidded for, and was subsequently awarded the Bulim Bus Package, a route package comprising 26 bus routes based out of the new Bulim Depot. This was the first contract awarded by LTA as part of the Bus Contracting Model (BCM), which will introduce a competitive scene of bus operators bidding for various route packages and a share of the market.

Coming May 2016, Tower Transit will take over the 26 bus routes in 3 tranches, as well as the managing of Jurong East and Bukit Batok Bus Interchanges. It will then operate these routes for five years, with a two-year extension granted based on good performance.

Getting to the Carnival

A shuttle bus service was arranged to loop between Bulim Bus Depot and Boon Lay MRT, picking up and dropping off participants on a rolling basis. The pick-up point at Boon Lay was the bus stop along Boon Lay Way, where CW6 also calls at.

Volvo B9TL buses registered with the SG-prefix were used on the shuttle, featuring green and white recruitment advertisements by Tower Transit. SG5006P, SG5007L, SG5008J and SG5009G were deployed, all featuring similar recruitment adverts in different languages on the nearside. 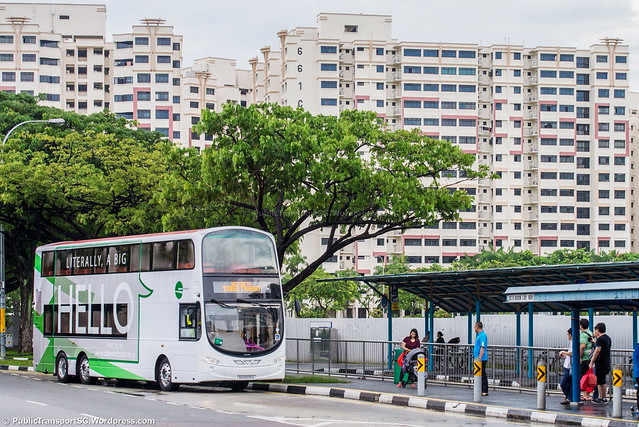 Arriving from the main entrance, guests were provided an activity card containing a event layout map, lucky draw ticket, and coupons for food, snacks and drinks. The administration building of the depot was used to host the event, with the large sheltered area on the ground floor intended for parking of buses in the future.

At the carnival, there were mini-exhibitions by Tower Transit Singapore, Volvo, Alexander Dennis Limited (ADL) and MAN, a display of bus liveries, and food and drinks. A bus design competition was also held, where the winner will have their design featured on an actual bus. A bouncy castle, airbrush tattoos, a photobooth and balloon-sculpting were activities arranged for children. Participants who were present at the event at 2:00PM would have been able to watch the official opening ceremony of the Bulim Bus Depot by Senior Minister of State Dr. Amy Khor and Tower Transit Group CEO Adam Leishman.

Other than the main event area, participants could sign up for a walking tour of the depot administration areas and taking a bus ride through the bus refueling area and bus wash. 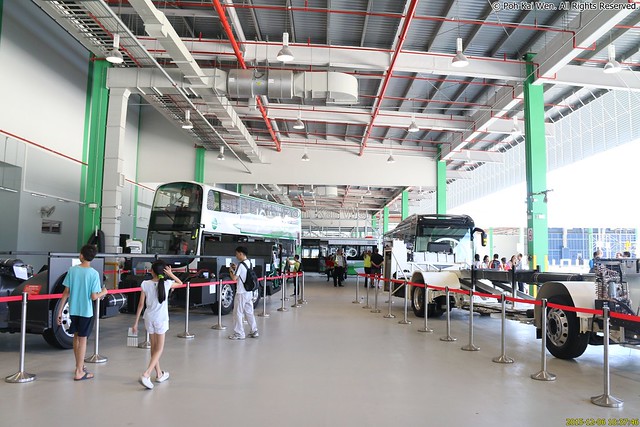 The Volvo B9TL (Wright Eclipse Gemini II bodywork) on display was registered SG5002A, built to SBS Transit’s latest “Batch 4” configuration which are also running on revenue service.  This configuration featured a straight staircase (with two staircase landings) and increased legroom for the front seats of the upper deck.

The Mercedes-Benz O530 Citaro on display was registered SG1002B and built to SBS Transit specifications. Under the BCM, Mercedes-Benz Citaros were procured by tapping into SBS Transit’s existing orders, hence retaining identical technical specifications and interior design. These buses were built in Germany and shipped completely-built-up to Singapore.

The MAN NL323F on display was unique in not featuring any special Tower Transit livery, but rather SMRT’s silver-grey base coat (prior to application of its pixel-design livery) with additional decals on its glass panels promoting the MAN bus. The unregistered bus is likely to be fresh from the Gemilang Coachworks assembly line and borrowed from local dealer ST Kinetics for the event.

Under the BCM, MAN NL323F buses (also known as the MAN A22) were procured by tapping into SMRT’s existing orders, hence retaining identical technical specifications and interior design. Just like its SMRT cousins, these buses were assembled by Gemilang Coachworks Sdn Bhd in Senai, Johor, with bodywork similar to MAN’s Lion City Hybrid buses under license from MAN.

However, on-board equipment such as the Integrated Driver’s Fare Console (IDFC) system, card readers and the coinbox were yet to be installed. 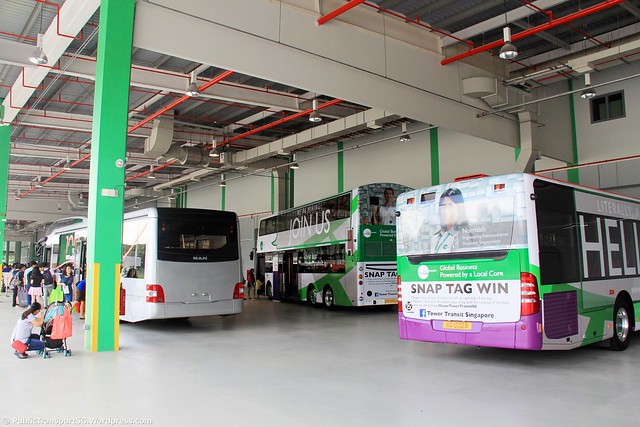 While Alexander Dennis Limited (ADL) did not have a static bus on display, a booth was set up. At that point of time, BSEP-registered Alexander Dennis Enviro500 units in Singapore were still  in service with SMRT and yet to be handed over to new BCM operators.

The first stop is the Tower Transit depot office, which was designed around the open office concept. Without cubicles, staff are more free to interact and move around, and the whole office has a more spacious feel without barriers in the way.

The operations control centre (OCC) is the heart of all Tower Transit bus operations, or at least it would be, once all the computers are installed in the near future. Apart from the regular team of staff who take care of bus operational matters, a separate team of staff would be dedicated to spacing buses apart and maintaining headway, crucial in keeping the Excess Wait Time (EWT) to a minimum. The EWT of a bus service is the main quality indicator of on-time adherence, and a low EWT score indicates that buses are operating with minimal deviation from schedule.

A dispatch office is also present, where bus drivers report to at the start and end of the work day. A counter next to the canteen and recreation area would be where drivers collect and return the bus logbooks, time sheets and other relevant documents for their shift.

The canteen and recreation area is the showcase of Tower Transit’s commitment to driver welfare, which they have termed “the best in the world”. Air-conditioned and bathed in natural lighting, the recreation area guarantees comfort for employees, especially bus drivers who are not on the roads. This mainly caters to drivers on the split shift, who only drive during the morning and evening peak hours with a long break in between.

Apart from tables, chairs and sofas, table soccer and table tennis are provided for recreational use. Interior furniture and table games were provided by Tower Transit themselves. 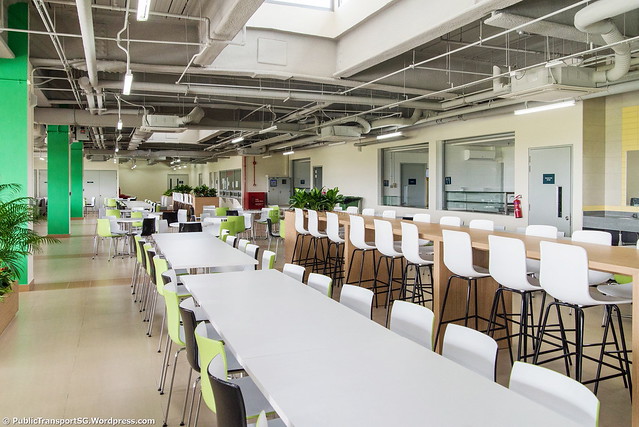 A tour of the bus refueling and bus washing areas was organised with two Volvo B9TL buses, SG5003Y and SG5004U, making their rounds around these two areas. Both buses featured SBS Transit livery (without the company logo) on the sides, and a full white front and rear.

Upon the end of their shift, bus captains returning to the depot would hand over their buses a specialised team of staff called shunters, which would perform the refueling, washing and parking duties of incoming buses. This is in contrast to SBS Transit and SMRT, where these duties would have normally been carried out by bus captains.

Designed for ten buses at a time, the refueling area has ten lanes to top up buses with diesel after a long day on the road. Currently, only one lane is equipped with an AdBlue pump. Used as a diesel exhaust fluid, AdBlue is a diesel exhaust fluid (DEF) used on buses employing Selective Catalytic Reduction (SCR) technology, which are the Volvo B9TL, Mercedes-Benz O530 Citaro and Alexander Dennis Enviro500 buses.

After refueling, buses head straight for the bus wash. Five automatic bus washing machines rinse off dust and dirt accumulated after a day of operation on the roads. Finally, buses would be parked throughout the depot.

The official opening ceremony of the Bulim Bus Depot was held at 2:00PM, with the Guest of Honour being Senior Minister of State and Member of Parliament for Hong Kah North, Dr. Amy Khor. Also around was Tower Transit Group CEO, Adam Leishman. 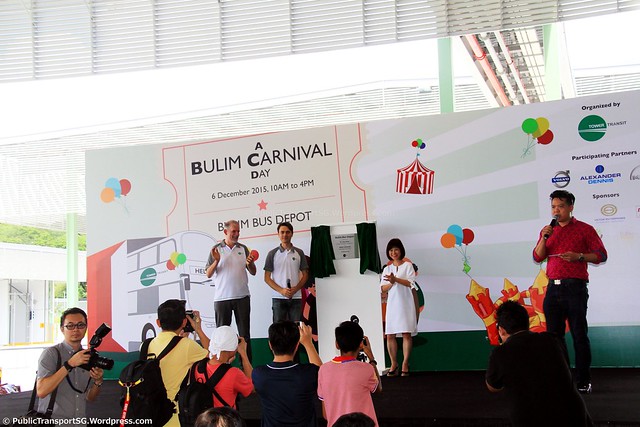 Guests who pre-registered for the event were entitled to a Tower Transit goodie bag containing snacks, water, a fan, card holder, water bottle, retractable lanyard and a foldable paper bus.

It’s A (Bus) Wrap: Design Competition was an on-the-spot design competition held during the carinival, and entries must be submitted between 10AM and 3PM on the same day. The grand prize winner would have their artwork and name featured prominently on a double-decker training bus which will ply one of Tower Transit’s 26 routes, as well as Faber Castell art materials worth S$120.

Local food from sponsors Putera Puteri Our Makan Place, Sinaran, and Delihub, provided meals in exchange for coupons provided at registration. Drink and snack stalls were also set up.

A small office near the entrance was used as a recruitment office, where interested participants could speak to the Human Resources team regarding recruitment matters.

Land Transport Guru would like to express our sincerest gratitude and thanks to Tower Transit Singapore for organizing the event.

Back to
Back to Bus Articles