The event provided a platform for Go-Ahead Singapore to showcase its new depot, while educating the public on what to expect when GAS takes over the bus routes from SBS Transit. In addition, static display buses will be open to public viewing, and job-seekers could sign up for job opportunities with Go Ahead Singapore as well.

The Go-Ahead Group successfully entered the Singapore bus scene when it was awarded the Loyang Bus Package in November 2015. This is the second contract awarded by LTA under the Government Contracting Model (GCM), which introduced a competitive scene of bus operators bidding for various route packages and a share of the market. It previously bid for the first bus package, which was awarded to Tower Transit.

Coming September 2016, Go-Ahead Singapore will take over 24 bus routes in 2 tranches from SBS Transit, as well as the managing of Punggol and Pasir Ris Bus Interchanges. It will then operate these routes for five years, with a two-year extension granted based on good performance.

The carnival, held months prior to the start of revenue service operations, mirrors that of Tower Transit when it organized “A Bulim Carnival Day“, a similar open house.

Loyang Bus Depot, which spans 8.3 ha, can accommodate about 500 buses, and similar to Bulim Bus Depot, is equipped with facilities for daily bus operations (e.g. refuelling and washing), bus repair/maintenance, and amenities for bus captains such as crew rest areas, staff lounges and a canteen. Located close to residential developments, the depot is built with a noise barrier wall along its entire perimeter.

In preparation for partial SMRT operations, two refuelling lanes and one bus wash have been reserved for SMRT Buses, along with around 109 parking lots. This arrangement will give SMRT an operating base in the East for its bus services that serve Bedok, Tampines and Changi Airport.

Getting to the Carnival

Shuttle Buses from Pasir Ris MRT Station will also be provided by Go-Ahead Singapore on the day of the carnival at Pasir Ris MRT Taxi Stand G22.

A shuttle bus service was also arranged to loop between Loyang Bus Depot and Pasir Ris MRT, picking up and dropping off participants on a rolling basis. The pick-up point at Pasir Ris was at Exit B, near Taxi Stand G22.

Volvo B9TL buses registered with the SG-prefix were used on the shuttle, featuring red and white recruitment advertisements by Go-Ahead. SG5055Y, SG5056U, SG5057S and SG5058P were deployed.

Arriving from the main entrance, the first 1000 guests were provided with a goodie bag containing a event layout map, lucky draw ticket, and coupons for food, snacks and drinks. The engineering shop of the depot was used to host the event, with the large sheltered area on the ground floor intended for maintenance work in the future.

At the carnival, there were exhibits by Go-Ahead Singapore and Volvo. A Magic Show, Balloon Extraordinaire Performance, Jigsaw challenge, Glitter tattoos, Balloon sculptures and Game booths were activities arranged for children. Participants who were present at the event at 12:30PM would have been able to watch the official opening ceremony of the Loyang Bus Depot by Member of Parliament for Pasir Ris – Punggol GRC, Mr Zainal Bin Sapari, and Group Chief Executive of The Go-Ahead Group, Mr David Brown.

Other than the main event area, participants could visit the depot canteen within the administration building for food and refreshments, and taking a bus ride through the bus wash.

What’s in the Bag?

Goodie bags were presented to the first 1000 visitors at the event. An event passport was also provided to all visitors, which can be used to redeem lunch and refreshments at noon, and completed in exchange for a chance at a lucky draw.

Items included in the goodie bag are: 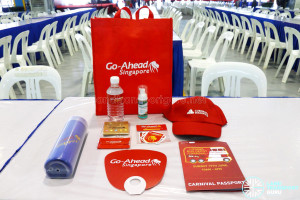 Under the Government Contracting Model (GCM), Go-Ahead Singapore operates Volvo B9TL double-decker buses alongside Mercedes-Benz Citaro single-deck buses, all of which would be government assets loaned to Go-Ahead for the duration of the contract period. Only Volvo Buses set up a booth at the event.

The static displays showcased a Volvo B9TL chassis, along with revenue service-ready Volvo B9TL and three Mercedes-Benz Citaro buses, one of which was used to showcase Go-Ahead’s new employee uniforms. However, the sole Volvo B9TL on display was not open to visitors. Buses featured were SG1054B, SG1057T, SG1058R (Mercedes-Benz Citaros) and SG5054A (Volvo B9TL).

The Volvo B9TL (Wright Eclipse Gemini II bodywork) on display was registered SG5054A, built to SBS Transit’s latest “Batch 4” configuration which are also running on revenue service.  This configuration featured a straight staircase (with two staircase landings) and increased legroom for the front seats of the upper deck.

The Mercedes-Benz O530 Citaro buses on display were registered SG1054B, SG1057T & SG1058R and built to SBS Transit specifications. Under the GCM, Mercedes-Benz Citaros were procured by tapping into SBS Transit’s existing orders, hence retaining identical technical specifications and interior design. These buses were built in Germany and shipped completely-built-up to Singapore.

The depot canteen, located at the second floor of the depot administrative building, was open for the benefit of visitors looking for refreshments. Three stalls are operated, namely a Chinese and Malay food stall and a drinks stall, with water coolers aplenty. Natural lighting is brought into the canteen through skylights in the roof.

A small rest area is also provided at the corner of the canteen, with a few tables and sofas.

A corridor leads to many other offices and meeting rooms around the second floor of the building, which were not offered to public access. Several offices, including the Operations Control Centre, was arranged only with basic furniture and appeared to be unfitted.

A tour of the bus washing area was organised with one Volvo B9TL bus, SG5053C, and one Mercedes-Benz Citaro, SG1053D, offering the bus wash experience onboard either a single or double decker bus. Both buses featured red and white recruitment advertisements by Go-Ahead.

Upon the end of their shift, bus captains returning to the depot would hand over their buses a specialised team of staff called shunters, which would perform the refuelling, washing and parking duties of incoming buses. This is similar to Tower Transit operations and in contrast to SBS Transit and SMRT, where these duties would have normally been carried out by bus captains.

Designed for ten buses at a time, the refuelling area has ten lanes to top up buses with diesel after a long day on the road. After refueling, buses head straight for the bus wash. Four automatic bus washing machines rinse off dust and dirt accumulated after a day of operation on the roads. Finally, buses would be parked throughout the depot. The Loyang Depot Bus Wash Tour did not feature the refuelling areas.

In preparation for SMRT operations, two refuelling lanes and one bus wash have been reserved for SMRT, along with around 109 parking lots.

The official opening ceremony of the Loyang Bus Depot was held at 12:30PM, with the Guest of Honours being Member of Parliament for Pasir Ris – Punggol GRC, Mr Zainal Bin Sapari, and Group Chief Executive of The Go-Ahead Group, Mr David Brown. A lion dance performance accompanied the event.

After the Opening Ceremony, visitors were able to take a visit the Go-Ahead offices.

Apart from game and activity booths, a recruitment booth was also set up and manned by Go-Ahead staff.