After a long awaited capacity upgrade, SMRT Bus Service 858 has finally received articulated buses (“bendy buses”) after trial runs by SMRT have demonstrated the capability of articulated buses operating on the route.

Unlike most other SMRT routes which received capacity upgrades in the form of double-deck buses, Bus Service 858 plying between Woodlands Regional Bus Interchange and Changi Airport PTB2 has height limitations which prevent the use of double-deck buses. The bus enters the basement of Passenger Terminal Buildings 1, 2 and 3, which are under 4 metres in height and unable to fit double-deck buses.

Articulated buses, which SMRT operates in substantial numbers, have not been deployed in a long time owing to a long list of reasons which have been suggested in the past. Be it tight turns in the basement, competency of drivers, or the long trailer blocking other buses, a part of this “articulated bus ban” may be attributed to Changi Airport Group which was said to have disallowed them in the basements to prevent complications.

As such, since its introduction, Service 858 has been operating with only 12-metre rigid buses. Running the long route with a complicated demand patterns, buses were often overcrowded and fell behind schedule, leading to long headways and bus bunching. Its situation was exacerbated by the route amendment to serve Sembawang in 2010, adding to existing demand and overall route length. Buses which encounter high demand and other adverse on-route conditions fall behind schedule, and leads to long waits for commuters further down the route which try to board overcrowded bus. Frequently, the back bus will catch up, leading to bus bunching, a scenario which regular 858 commuters would be very familiar with.

Fortunately, articulated buses are on the road to making their debut appearance soon following successful demonstrations by SMRT that its newer 18.75-metre MAN NG363F (A24) articulated bus can indeed nagivate through the Changi Airport basements safely. Arrangements made between SMRT, LTA & Changi Airport Group, combined with initial trial runs in 3Q 2015 paved the way for the authorization of articulated bus deployments on Service 858, specifically the MAN NG363F model only, due to its improved turning radius compared to SMRT’s older Mercedes-Benz O405G articulated buses. Driver familiarization was carried out by SMRT in the period leading up to the articulated bus launch date, which we have managed to capture in photos attached within this article.

Articulated buses would be a compliment to SMRT and LTA’s efforts to improve the overcrowding issues and overall reliability of Service 858. The Bus Service Enhancement Programme has injected many more 12-metre MAN NL323F buses on this route, and additional downroutes from Jalan Kayu towards Changi Airport help passengers at Jalan Kayu and Punggol Road board a bus towards the Airport more easily.

While the addition of higher capacity articulated buses will do little to address Service 858’s inefficient routing, commuters can now enjoy a brief respite with the additional capacity made available.

To better accommodate the articulated bus, Changi Airport Group shifted berths around to create more space for Service 858. At Terminals 1 and 3, Service 858’s berth was moved from the frontmost position to the middle position to prevent the rear from obstructing boarding and alighting activities of buses at the previous berth. At Terminal 2, Service 53 was moved away from its shared berth with Service 858 and swapped with Service 27, to allow Service 53 to continue its regular short layover at the berth without obstructing Service 858.

The changes to Terminal 3 and 1 berths were implemented as the turning radius of the 858 bendy buses can only allow it to call at the middle berth.

For safety reasons, it is compulsory for Service 36 buses to give way to Service 858 bendy buses at Terminal 3. Also, all rigid SMRT buses will have to enter the Terminal 2 berth via the back lane as not to obstruct buses at the last berth from the exit. Bendy buses are allowed to enter the berths via the front lane.

In the event that any of the Terminal Basements are impassable, all buses will conduct boarding and alighting activities at the Departure Hall of the affected terminal instead of the basement.

However, in the event Terminal 1 Basement closes and buses call at Terminal 1 Departure Hall Gate 5, the contingency route for buses are as follows:

There is a sharp left turn from T3 Link North to Airport Blvd as well as a U-Turn from Airport Blvd to T2 Blvd. Through rigorous testing by SMRT and Changi Airport Group, the MAN A24 Bendy is able to negotiate the above mentioned turns. All Service 858 bendy drivers are trained in this contingency route as part of their bendy training for Service 858. 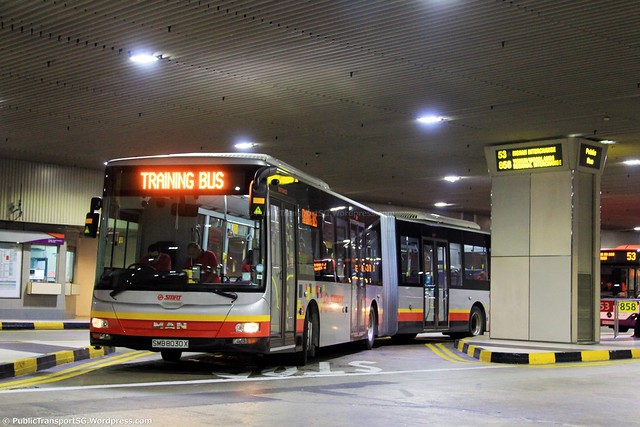 ^ Driver familiarization runs conducted on an SMRT MAN NG363F (A24)

3 thoughts on “Articulated Buses for Service 858!”