Senai Airport is a small airport located in Johor Bahru, serving mostly domestic flights and several international flights to nearby destinations. The airport is served by multiple public bus services which call outside the main passenger terminal building, which we collectively term Senai Airport (Bus Terminal). 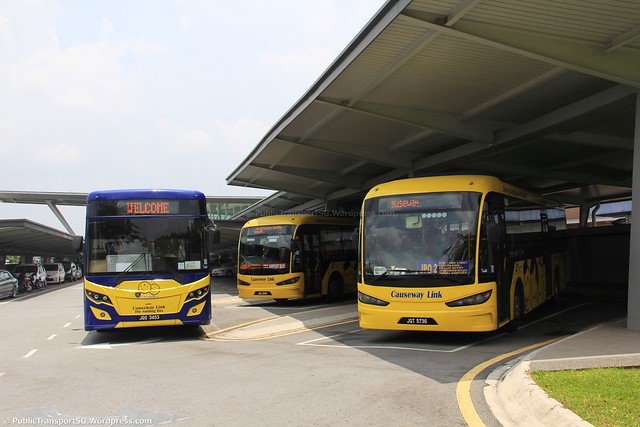 Causeway Link buses at the terminal

The terminal is served by a small number of local bus services which head for Johor Bahru city. One of which is the CWA Airport Shuttle Service, operating daily at hourly intervals and provides an express link to JB Sentral Bus Terminal, in the heart of Johor Bahru. Other bus services serve the surrounding neighbourhood areas of Kulaijaya and Senai Town. Buses are most plentiful on Sundays and Public Holidays.

Express coach services are operated by private operators to other destinations in Malaysia.

Local bus service charge a fare upon boarding, but only the CWA Sky Shuttle requires a ticket purchase prior to boarding.

The most convenient way of getting in and out of Senai Airport is the CWA Airport Shuttle Service operated by Handal Indah (Causeway Link). It is an express service between JB Sentral and Senai Airport with no intermediate stops.

Buses depart Senai Airport daily at 6:10am and then every hourly from 7:00am to 9:00pm. Last two departures are at 10:15pm and 11:30pm. A ticket can be purchased from the Causeway Link counters at each end, one inside the Senai Airport passenger building and the other at JB Sentral Bus Terminal. As of 2015, the fare is RM8.00 per journey.

Services marked with an asterisk (*) operate on Sundays and Public Holidays only.