The first two MAN Lion’s City Face-lifted Double-Decker Buses made their revenue service debut on 14 February 2017. A total of 122 buses were acquired in total, featuring a face-lifted design with aesthetic modifications to the front and rear, as well as USB Charging Ports.

In this article, we show how the MAN Lion’s City DD is being assembled for the Singapore market. The Land Transport Authority (LTA) announced the purchase of 122 units in September 2016, with deliveries expected to complete by end-2017.

Public Buses form the backbone of the Singapore Public Transport scene, with an average daily ridership of 3.89 million in 2015 and increasing. There are over 5,300 buses currently in operation, running on scheduled services across the island, making public buses a ubiquitous sight in Singapore. They come in many types and models, from double-deck to single-deck and articulated buses, produced by a variety of European companies such as MAN, Volvo, Mercedes-Benz, Scania and Alexander Dennis.

Just north of our borders, a factory in Malaysia builds many of the MAN and Scania transit buses that operate on our roads. Gemilang Coachworks Sdn. Bhd., is a bus bodybuilder that builds and assembles a variety of city buses and coaches for the local and international market, with Singapore being its main customer. 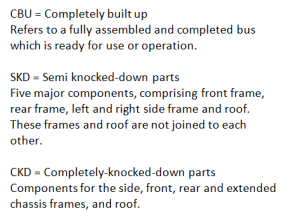 Established in 1989, Gemilang Coachworks designs and manufactures buses for its core market in Singapore and Malaysia, as well as developing markets in Australia, Hong Kong, China and India. The company sells its products in two forms – (i) in the form of bus bodies (SKDs and CKDs) for local assembly and onward sales; and (ii) in the form of whole buses (CBUs) which are assembled onto chassis for direct delivery.

Between 2006 to 2010, Gemilang Coachworks built knock-down kits for SBS Transit’s Scania K230UB buses, only 3 of which were assembled by Gemilang themselves. The majority of the 1,101 buses were built in Singapore by ComfortDelGro Engineering or SC Auto. Also around 2006, knock-down kits were built for SMRT’s Mercedes-Benz OC500LE buses, with all 134 buses assembled by Thonburi Bus Body of Thailand.

From 2011, Gemilang Coachworks built and assembled whole buses for SMRT on the MAN chassis, using the MAN Lion’s City bodywork design. Originally available only as an integrated product from MAN, Gemilang Coachworks was awarded a license to reproduce the design. Between 2011 and 2015, it built 734 MAN NL323F buses for SMRT, along with 40 MAN NG363F buses, built with the Lion’s City Hybrid and Lion’s City G bodywork respectively. From 2013 to 2017, the MAN A95 was also produced by Gemilang with the Lion’s City DD bodywork.

The production these bodywork kits, along with the assembly of whole buses, are performed at Gemilang Coachworks’ factory in Senai, Johor Bahru, Malaysia.

The bus assembly process starts with completed MAN A95 chassis units, built in Germany and shipped to the factory. Gemilang then begins by building the bus in stages, starting with the aluminium superstructure followed by the interior components. There are a total of three assembly lines.

The MAN A95 utilises the EcoRange System, an aluminum-based construction developed by Constellium. It facilitates the use of bolted connections, reducing the usage of rivets and eliminating the need for welding during the assembling and mounting of the aluminium superstructure onto the chassis.

The construction of body structures starts with various structural components (such as those supplied as a SKD kit), and a chassis frame. Gemilang usually works closely with the chassis manufacturers to identify the critical dimensions for setup and levelling. This process can be seen as ‘Stage 1’ on the right side of the above photo.

The body structure is then mounted on the chassis. For steel buses, a body-on-frame construction method is used, and the superstructure is welded onto the chassis. On the other hand, for aluminium body structures such as those used on the MAN A95, the five major superstructure parts (front frame, rear frame, left and right side frames and roof) are bolted together, part by part, onto the chassis. This process can be seen on the left side of the above photo, under ‘Line A’.

Panelling consists of exterior and interior panelling, where all the panels are moulded and secured onto the body structure to enclose the bus.

4.  Installation of exterior and interior accessories

Installation of exterior accessories includes the installation of doors, windows, windshields and other systems on the bus. An integral part of the bus assembling process also involves the installation of interior fixtures and accessories. The interior layout and requirements are based on bus transportation operator’s specifications covering various aspects including aesthetics, safety as well as optimising the number of passenger seats and luggage space. This process can be seen on the right side of the above photo, under ‘Line B’.

Coatings are part of body surface finishing works, protecting the bus from corrosion as well as for aesthetics purposes. The Gemilang factory has four spray booths, which are purpose-built structures with proper ventilation and filtration systems.

At this stage, the bus is structurally complete. As part of the final fitting process, electronic components throughout the bus are wired up and additional fixtures are installed.

Finally, completed buses are parked around the factory floor, awaiting delivery to Singapore.