Sentosa is an island resort south of Singapore, connected to the mainland by a road bridge. The leisure destination hosts many attractions and is frequented by locals and tourists alike. The most prominent attraction, Resorts World Sentosa, is served by bus services from the mainland. The statutory board, Sentosa Development Corporation (SDC), oversees the development, management and promotion of the island.

Buses are one of a few main modes of transport within the island, alongside the Sentosa Express monorail, Cable car, Beach tram and other private bus services.

There are two main bus routes within Sentosa Island, offering free travel. Bus A and Bus C serve the western part of Sentosa, while Bus B connects to attractions on the eastern side of Sentosa.

As part of a reorganisation of Sentosa bus services, Sentosa Buses 1, 2 and 3 was reorganized into two routes, Bus A and Bus B from 30 July 2017. The terminal will also be served by public bus services to the Singapore mainland, with the route amendment of Service 123 to serve the terminal.

Shuttle bus timings can be accessed here. Payment can be made via EZ-Link card or Sentosa Cove access card. The fare is $2 per trip.

In recent history (not counting SDC-contracted SBS Leisure services which began in 1992), the first Public Bus Services to Sentosa were rerouted to Resorts World Sentosa in 2010 following the opening of the resort. Service 123 was the first trunk route to serve Sentosa Island following a route amendment in July 2017.

Services 188R and 963R only operate on Weekends & Public Holidays during the day, and charge Express fares.

NightRider NR1 and NR6 only operate on Fridays, Saturdays and Eves of Public Holidays, running unidirectional trips only at night between 11.30pm to 2.00am the next day. 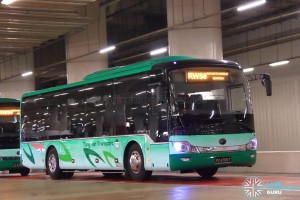 RWS8 is the primary bus link between HarbourFront and Resorts World Sentosa.

Enquire directly with the hotel.

Buses to Sentosa were first introduced on 16 December 1992 with the opening of a newly completed 710-metre causeway built at a cost of S$117 million, spanning the Keppel Harbour and linking Sentosa Island with mainland Singapore for the first time. Previously, all visitors to Sentosa Island commuted by ferry.

Two routes were initially operated, Route A from World Trade Centre Bus Terminal (presently HarbourFront Bus Terminal) to Fort Siloso / Underwater World and Route B from Tiong Bahru MRT Station to Central Beach. The services were operated by SBS Leisure, a subsidiary of Singapore Bus Service (SBS), using new Volvo B10M (Mark III) buses. The buses initially charged a $5 fare for Adults and $3 for children, inclusive of the Sentosa Island admission fee. Free rides were offered within and out of Sentosa.

Later, on 20 January 1993, Route C was launched between Tiong Bahru and Sentosa Ferry Terminal, and Route B downgraded to weekend operation. On 10 June 1993, the Sentosa Escapade was launched between Orchard/Marina Centre and Sentosa, with new Soon Chow bodied Volvo B10M (Mark IV) buses added to the fleet. On 10 June 1996, Service B was withdrawn and replaced by Service M, plying between Tiong Bahru MRT and Sentosa Food Village.

SBS Leisure operated the Sentosa shuttle routes until their contract with SDC terminated in 2004. SDC took over the operation of its own services, while supplementing its trips through contracts with private bus operators such as Woodlands Transport.

In 2010, following the opening of Resorts World Sentosa, around 10 free shuttle services were launched between the heartlands (Ang Mo Kio, Bedok, Bishan, Bukit Merah, Bukit Panjang, Choa Chu Kang, Jurong East, Queensway, Tampines & Tiong Bahru) and the Integrated Resort (IR) to bring in guests. However, they were abruptly ceased in September 2010 after a directive from the Casino Regulatory Authority, amid concerns that the Resort was making it too easy for heartlanders to visit the IR to gamble. Shuttle services between the City and RWS ceased shortly after.

Service 123 was the first trunk route to serve Sentosa Island following a route amendment in July 2017.

Back to Bus Articles

One thought on “Sentosa Bus Services”