The Singapore Airshow 2016 will be held from 16th to 21st February 2016. Back for its fifth installment, the biannual event since 2008 is Asia’s largest and one of the most important aerospace and defence exhibitions in the world.

The Airshow is split into Trade Days (16th to 19th Feb) for invited guests, and Public Days (20th & 21th Feb) for tickets holders. Members of the public can prepare to feast their eyes for up-close static aircraft displays, as well as stunning aerobatic flying displays of the Airbus A350XWB, Republic of Korea Air Force’s Black Eagles, and many more!

This article will provide you with information on how to get to Singapore Airshow 2016 by public transport.

Getting to Singapore Airshow 2016 (by Public Transport)

Do note that only vehicles with valid car park labels are allowed entry into Aviation Park Road. Taxis are allowed to enter the road to drop off or pick up passengers, with a $10 location surcharge for taxi trpis originating from Changi Exhibition Centre during this period. Private-Hire Car services such as GrabCar and UberX are not allowed access to the area.

As such, it is advisable to travel by using the shuttle bus services provided between Aviation Park Road and Expo MRT Station.

Take the train to CG1 Expo along the East-West Line. A train transfer is required at EW4 Tanah Merah to the Changi Branch Line for all rail commuters other than those from Changi Airport.

Once at Expo station, head for Exit A towards Singapore Expo (Foyer 2). Once inside, turn right and cross Expo Drive for Foyer 3 and Expo Halls 7 to 10.

If you are riding bus services 20, 47 or 118, alight at Changi South Avenue 1, Opp Yusen Logistics. From the bus stop, walk straight ahead towards Expo MRT Station. From there, follow the signs to Expo Hall 7 through at Exit A.

A security screening will be done inside Singapore Expo Hall 7 and tickets will also be validated there.

Visitors to the Airshow during the Public Days (20 & 21 February 2016) are encouraged to board the Airshow Shuttle at Singapore Expo Hall 7 for transfer to the show site. The Airshow Shuttle is available to public visitors with valid tickets, as well as valid pass holders only.

For the public, the admission ticket includes two rides on the Shuttle to and from Changi Exhibiton Centre. Security checks will be conducted at the shuttle bus boarding point for visitors taking the Airshow Shuttle Bus. A map of the boarding and alighting point can be viewed here.

Buses depart for Changi Exhibition Centre between 7:30am and 3:00pm. Return trips to Singapore Expo depart between 1:30pm and 6:00pm.

As with previous years, SMRT Buses have been contracted to provide the shuttle, deploying over a hundred articulated buses for the event. Majority of buses deployed are Mercedes-Benz O405G (Hispano Habit) and MAN NG363F (A24) buses, with a small minority of Mercedes-Benz O405G (Volgren) buses.

Unlike previous years, there were no Mercedes-Benz OC500LEs on standby for wheelchair passengers as the new MAN NG363F buses are wheelchair-accessible.

This year, shuttle buses are labelled with a letter prefix followed by a number. 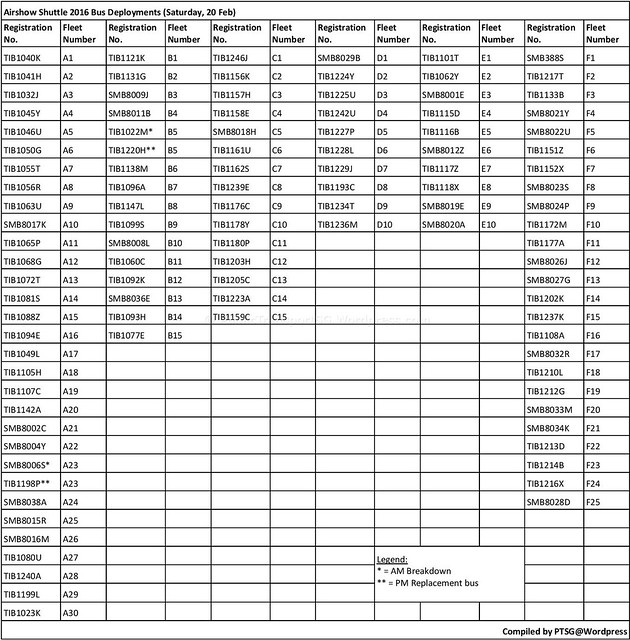 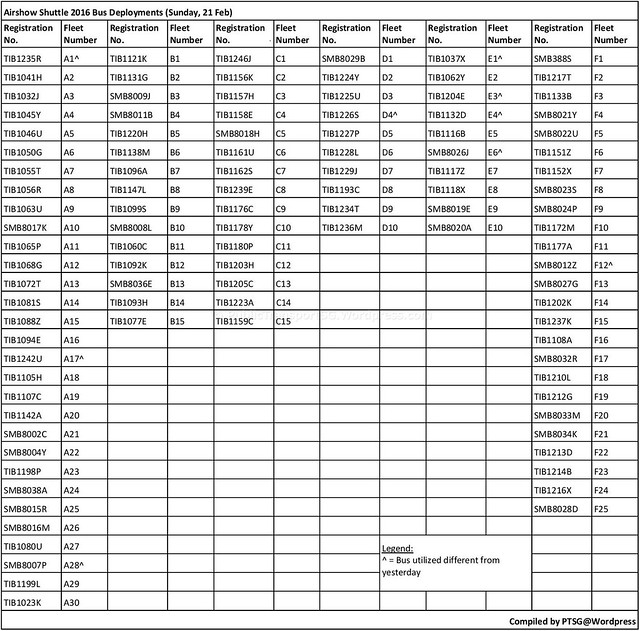 The Airshow Shuttle service is available to all trade attendees during the Trade days.

The Shuttle bus fare of $8.00 per person per journey will be collected upon boarding, and seat availability is subject to a first-come-first-serve basis. The shuttle operates at 15 minute frequencies during trade days.

To board the Shuttle, visitors must present a valid trade day pass. The bus boarding point is the coach bay next to Expo MRT Station. Signs will be placed to guide visitors to the boarding point.

Trade visitors staying at Singapore Airshow 2016 Official Hotels (Swissotel The Stamford, Fairmont Singapore, Marina Mandarin Singapore or Pan Pacific Singapore) may board the Hotel Shuttle service to and from Changi Exhibition Centre on trade days only. The Shuttle bus fare of $10.00 per person per journey (cash only) will be collected upon boarding, and seat availability is subject to a first-come-first-serve basis.