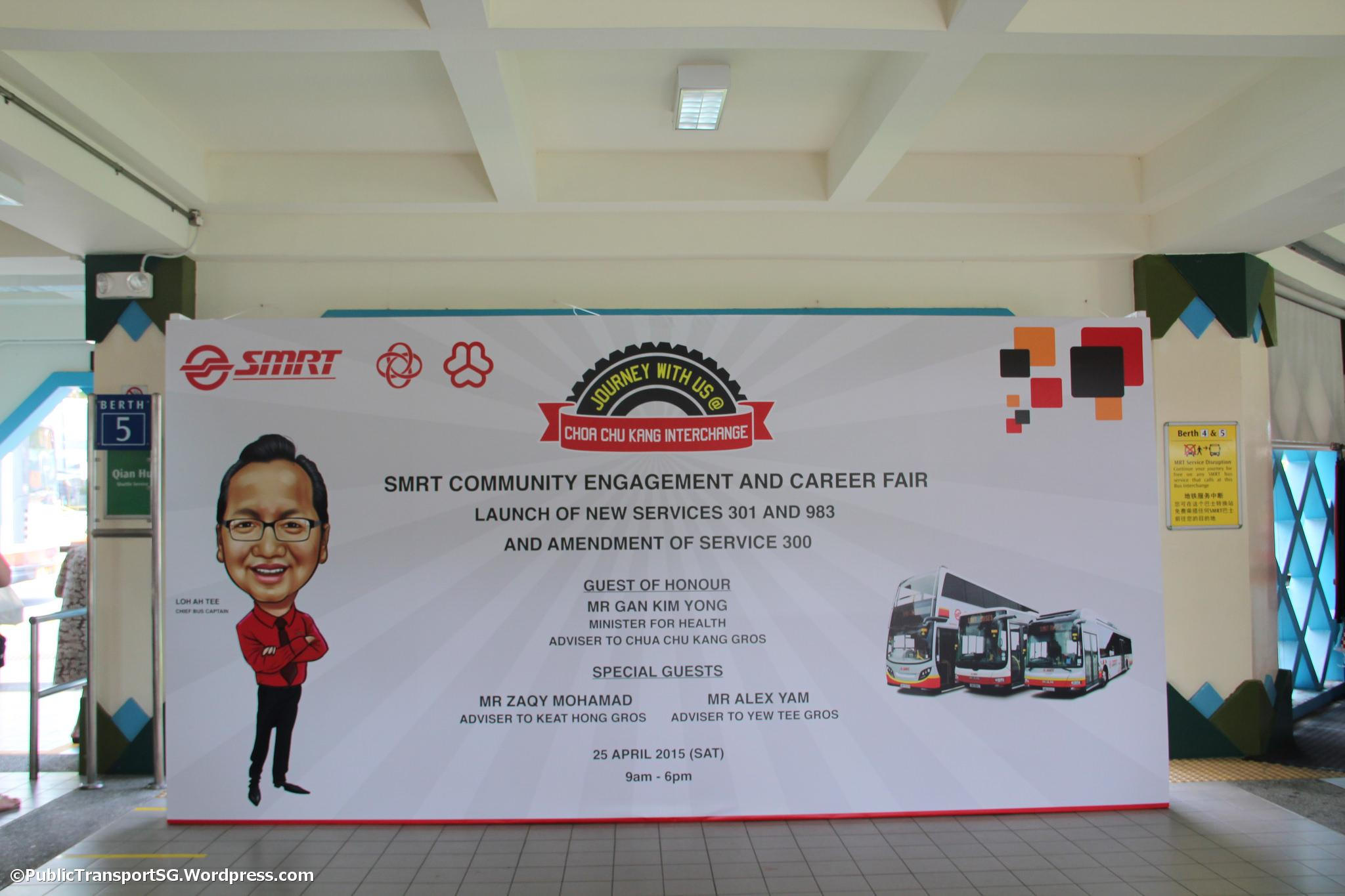 Organised to compliment the launch of Feeder Service 301 and Trunk Servce 983, the event provided a platform for SMRT to showcase its operational capabilities and available job opportunities with various booths at the event.

This is the third Community Engagement and Career Fair organised by SMRT, the first being in September 2014. Unlike previous carnivals, static bus displays and the bus simulator did not make an appearance likely due to space constraints within the bus interchange.

Although there was a Journey With Us @ Yishun Temp Int, we do not consider that as an actual carnival but rather more of the launch of Yishun Temp Int.

On 25 April 2015 at 0930hrs, Guest of Honour Mr Gan Kim Yong, along with Special Guests Mr Zaqy Mohamad and Mr Alex Yam, rode Services 300, 301 & 983 separately to mingle with commuters traveling along the route before heading back to Choa Chu Kang Bus Interchange. They then took Service 983 to Choa Chu Kang Ave 5 – Blk 485, the bus stop most affected by the new amendments, to interact with residents there.

One additional trip of Service 983 (SMB5040L) was deployed to ferry the MPs from Choa Chu Kang Ave 5 back to Choa Chu Kang Int at 1220hrs. However, they missed the special trip, and ended up arriving Choa Chu Kang Bus Interchange on Service 301 (SMB3085X) instead.

A row of SMRT Bus Captains lined up to welcome and exchange handshakes with the Guest of Honour and Special Guests. Student ambassadors from South View Primary introduced the newly installed Passenger Interactive System (PIS) to the MPs.

The launch ceremony included the screening of a video about the improvements to Choa Chu Kang Interchange as well as the planning involved for Services 300, 301 & 983.
Watch the video here. (SMRT Official Facebook)

The exhibition area was located at the sheltered walkway which connects Choa Chu Kang Bus Interchange to the MRT Station. The exhibition showcases the Bus Operations Control Centre (BOCC) monitoring application, in which SMRT staff members use to monitor various aspects of service reliability such as frequency as well as driver performance. A career booth was also set up to promote a career with SMRT Buses and available job vacancies. A flea market was set up by Choa Chu Kang residents, and alongside that, a Health Promotion Board booth to promote their I Quit and 1 Million Kg Programmes.

The service excellence booth allows commuters to express their gratitude to SMRT staff by penning down their appreciation messages on post-its. These messages are then showcased on the giant appreciation board for all to see. Upon submitting the encouraging message, the attendees would be given Bag Down Benny card holders or lanyards.

Similar to the previous bus carnivals, the Bus Service Reliability Framework (BSRF) monitoring station was showcased, featuring buses with telematics data on SMRT BSRF routes (176, 184, 188, 189, 302, 853, 858, 901, 911 and 962) as blue dots on a map of Singapore. The individual buses can be sorted according to their route, allowing controllers to monitor the frequency of these services and take necessary action to maintain the BSRF requirements.

The bus operations applications were only for display during this carnival, unlike previous carnivals where there was a demonstration by the staff manning the booth on how to track specific buses or specific bus captain to monitor their performance.

Service enhancements posters regarding Choa Chu Kang Int services were also put up to inform commuters of the recent improvement to bus services such as additional double-decker bus deployments.

B3: Training And Recruitment

The company also promoted their new progressive career scheme for bus drivers with clear advancement pathways. Since last year, drivers can upgrade themselves to higher salary ranges with each progression, using a competency framework for skills upgrading in areas such as customer service, leadership management and technical knowledge. 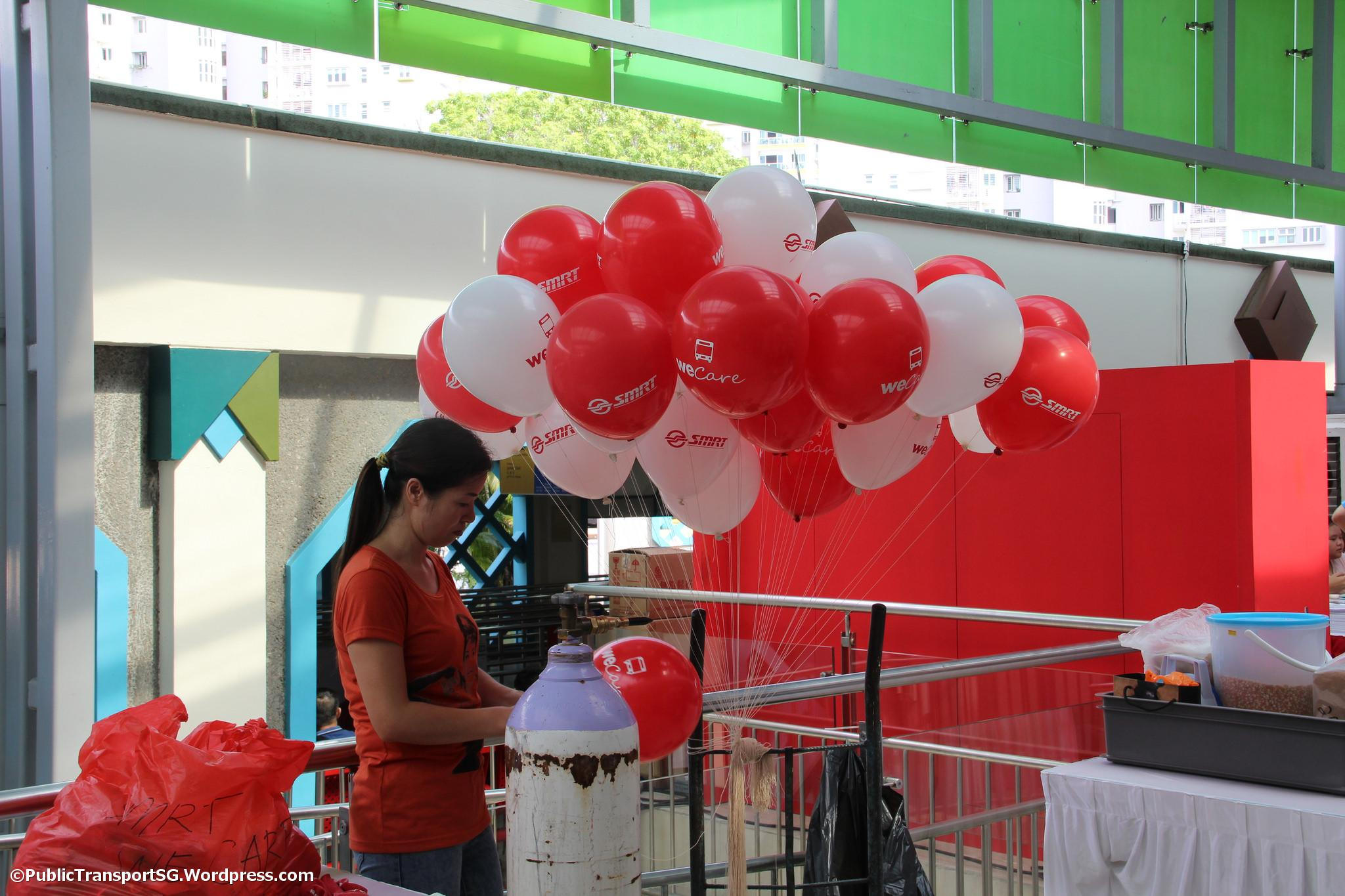 Apart from the booths that SMRT have set up, there were other booths in the exhibition area.

The improved SMRT Service Guide Rack also made its appearance during the carnival. It features slanted slots for service guides as well as service number label on the slots. The improved design keeps the service guides in mint conditions as the previous guide racks (at Yishun Temp & Bukit Batok Int) would cause the service guides to be bent at the front due to the vertical positioning of the guides.

New next bus arrival timing display for every berths were also installed to show the next 2 bus departure timings for the services at each berth.

Official SMRT Video on the carnival