During the just-ended ‘Our Bus Journey’ carnival organized by LTA, two concept double-decker buses were put on display, providing a glimpse of what buses will be like in the near-future. The buses are specially designed to improve commuter flow and minimize bus stop dwell time, as well as to improve the overall commuting experience.

Double-decker buses have poor passenger flow when there are many passengers wanting to board and alight at a bus stop. Current double decker buses have only one staircase and two doors, resulting in a bottleneck between the front and the back door, where boarding passengers are required to wait for all alighting passengers from the upper deck to disembark before being are able to move further inside the bus. A 2014 study also concluded that the time taken for a passenger to alight from a double-decker is 0.2 seconds longer than from a single-deck bus, resulting in longer bus stop dwell times.

These two concept buses, namely an Alexander Dennis Enviro500 and a MAN Lion’s City DD L, offer ideas on how to mitigate this age-old problem and are a result of LTA’s efforts to improve passenger flow and movement within the bus as well as in and out of a double decker bus. Both buses are fundamentally similar, featuring the addition of a second staircase as well as a third exit door to improve passenger flow. However, the design of both buses reflect different interpretations and applications of the above idea, positioning the staircases and exit doors differently.

First, we shall illustrate the differences between the two buses. 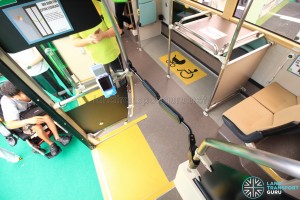 In addition, the MAN Lion’s City DD L has television screens as part of the passenger information display system which was not present in the Enviro500 mockup. Supplementary features offered by MAN were touch activated bus stop buttons, as well as an unsafe driver behavior detection system designed to prevent accidents by detecting mobile usage and micro-sleeping behaviour.

Meanwhile, the Alexander Dennis Enviro500 has LED lights along the exits, cabin floor and the staircase floor to improve user visibility and safety.

Previously, buses had no bus stop announcement systems, and only Passenger Information System screens were available on newer SMRT buses to display the upcoming bus stops. Since 1 April 2016, LTA has been rolling out new equipment on buses with bus stop announcements, and the full capabilities of the new system have yet to be proven on revenue service.

However, bells and whistles such as USB ports and touch activated bus stop buttons should not be implemented if installation costs are high and if there is no guarantee they will be properly maintained. This is especially important for the USB ports as they can potentially cause accidents through electrical fire.

Ultimately, public preference in bus design and configuration would a key factor in the decision making of the Land Transport Authority.

This article is written by Omnibology SG, an independent Facebook page providing news updates and infographics on Singapore’s buses.

If you like to contribute articles to Land Transport Guru, feel free to drop us a message through our Facebook page or the Contact Us form located at the bottom of the page.