First manufactured on 30 September 2010 in Changsha, an initial 200 units were delivered to the Shenzhen public transit system to serve the 2011 Summer Universiade, and subsequently remained in regular service with the local bus system. BYD has since expanded its production to Haikou city, and the electric bus has been trialled in many regions globally, including New York City, Sao Paolo, Hong Kong, Thailand, Malaysia, and London, in addition to huge success in the domestic market.

The bus design incorporates large-capacity Lithium-Iron-Phosphate batteries which allow the bus to travel 250km on a single charge, under urban road conditions. Go-Ahead Singapore trialled the bus (registered SG4001J) for a little more than six months from November 2016 to May 2017 to assess the suitability of e-buses for public transport. After the trial, it was re-registered as PC6264K.

As an expansion of the trial, the Government intends to procure 60 more electric buses as surfaced during the Committee of Supply Debate 2017.

First manufactured on 30 September 2010 in Changsha, an initial 200 units were delivered to the Shenzhen public transit system to serve the 2011 Summer Universiade, and subsequently remained in regular service with the local bus system. BYD has since expanded its production to Haikou city, and the electric bus has been trialled in many regions globally, including New York City, Sao Paolo, Hong Kong, Thailand, Malaysia, and London.

In June 2011, SMRT Corporation signed a Memorandum of Understanding (MoU) with BYD to enter discussions on a joint venture of distributing BYD K9 buses and e6 taxis in Singapore. SMRT Buses was concurrently running a trial of a Zhongtong diesel-electric hybrid bus, which was subsequently rejected.

The BYD electric vehicles did not materialise in Singapore for 4 years. Panorama Melaka of Malaysia received a trial unit of the BYD K9 in 2013 with the chassis number LC06S24S3D00000002. Its interior specifications were similar to that of SMRT’s buses, featuring Vogelsitze seats with purple and red PVC seat covers, as well as a foldable seat similar to that installed on MAN A22 buses. This led to suspicion that SMRT had rejected its BYD K9 electric buses.

In April 2015, Singapore saw its first BYD K9 bus, which was brought in by HDT Singapore Holding (the sole Singapore agent of BYD Co. Ltd back then). This bus was parked inside Nanyang Technological University’s campus for inspection (April to July 2015), and was later shipped to Jakarta for a while before returning. 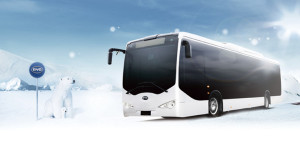 The BYD K9 is a fully electric city bus manufactured by the Chinese company BYD. The bus is sold alongside its range of other electric vehicles, whereby the company aims to promote renewable energy use in cities.

At the heart of the full electric bus are its three high-capacity Lithium iron phosphate batteries, two located on each side above the front wheels of the bus and another on the roof, which stores the electric power needed to power the bus. A full 5-hour charge provides sufficient energy for over 250 kilometres of usage—suitable for most urban bus routes.

The bus is propelled by an in-wheel motor drive system, which realises the function of in-wheel motor drive and hub reductor. A pair of Brushless AC Synchronous Motors (model BYD-TYC90) connected to each side of the rear drive axle power the bus, and rated at 75kWh each, give the bus a combined 150kW of power. At the same time, regenerative braking recovers energy when the brakes are applied, which is then fed back to the vehicle batteries.

Powered solely by electrical energy, BYD frequently touts the zero-emission aspects of the bus. Its batteries are environmentally-friendly, non-toxic and can be recycled. It also claims considerable savings in running costs as compared to regular diesel-powered buses. The bus is available with two variants of electric motors, the BYD-TYC90A and the BYD-TYC180A, of which the latter variant is rated at 150kW each, giving the bus a combined 300kW of power.

The local unit bears the chassis number LC06S24S7D0000004, and messages pasted inside the bus indicate that its “Period of Inspection” will be from April 2015 to July 2015.

Previously around NTU, the bus was never registered and was moved away after several months. The bus later appeared at the Smart Innovation Centre along Ubi Avenue 4 in a green environmental-themed promotional livery and the Go-Ahead Singapore logo. The bus was registered SG4001J for the duration of its trial.

After the revenue service trial, SG4001J was returned to BYD Singapore Pte Ltd and re-registered as PC6264K. Under BYD Singapore, it was also leased out to Tong Tar Transport Service Pte Ltd. The bus was regularly sighted on the Downtown East Lunchtime Shuttle Bus.