The interchange commenced operations on 12 March 2016, when it took over all bus services from Woodlands Regional Bus Interchange. Following the opening of Woodlands Integrated Transport Hub on 13 June 2021, most bus services were shifted over to the new interchange, with the exception of Services 925, 950, 961 & 965 and their respective route variants, which remained at the old interchange.

Woodlands Temporary Bus Interchange (WTBI) is large temporary bus interchange in Woodlands. The facility is located adjacent to Woodlands MRT Station along the North South Line (NSL) and Thomson-East Coast Line (TEL), allowing for convenient transfers between the rail network and the many bus services at the interchange.

The interchange was built as a temporary replacement for Woodlands Regional Bus Interchange. In tandem with the construction of the TEL, the old interchange would be extensively upgraded, to feature a fully air-conditioned concourse, with an underground linkway to the TEL station, and an expansion of the bus park to accommodate more bus parking.

Like most other temporary interchanges, the bus park is located in the middle, with the passenger concourse wrapping around the perimeter. The parking bay has room for 51 articulated buses (18-metre) and 10 rigid buses (12-metre), but many of these articulated bus lots were converted to double-parking of rigid buses to ease parking congestion and with the gradual decline of the articulated bus fleet. A single combined vehicular entrance and exit leads to Woodlands Square.

A long alighting berth accommodates seven buses, and there are ten sawtooth boarding berths (similar in number to the old interchange).

Two passenger lifts were later added to improve disabled access, one at the main entrance, and one at the East entrance (near the alighting berths). Previously, only wheelchair ramps and staircases were offered.

Following the opening of Woodlands Integrated Transport Hub on 13 June 2021, most bus services were shifted over to the new interchange, with the exception of Services 925, 950, 961 & 965 and their respective route variants, which remained at the old interchange.

As part of scaled-down operations at WTBI, Berths 3, 4, 5, 6 & 7 were reclassified as Berths A1, A2, B1, B2 & B3 from 13 June 2021 onwards. The other berths were rendered defunct, and cordoned off. The East and West exits entrances also shut, leaving only the main entrance in the middle of the interchange concourse.

The interchange also continued to be used as an overnight parking area for SMRT Buses.

To facilitate operations of the Vaccinated Travel Bus Service (formerly VTL-Land Bus Service) from Nov 2021 to Apr 2022, a section of the Temporary Interchange was used as a holding area and boarding point.

A free Priority Assistance Buggy Service was also provided launched for the benefit of commuters who have difficulty moving around. The electric buggy service operates from 7:00 am to 11:00 pm, and can be called using the interactive panels stationed around the interchange. The buggies are based in the interchange with their own charging station near Berth B4, and red lanes drawn throughout the interchange encourage commuters to give way to the buggy when they are in operation.

A smart bus parking system was installed to track available spaces at the alighting berths and parking lots. This information is, in turn, relayed to bus drivers via two large screens mounted around the interchange. In addition, a sophisticated camera network tracks bus movements and is able to relay the registration numbers of incoming buses to the interchange control room, as well as tell where each bus is parking in the interchange. According to Nedap, its SENSIT smart parking sensors were installed in individual parking spaces.

From 13 June 2021, the following facilities were discontinued:

The history of bus termini in Woodlands started in the 1970s, in tandem with the construction of Woodlands New Town and the first Housing & Development Board (HDB) estates in Marsiling. Roadside bus termini were known to have existed at the time included:

With the opening of Woodlands Town Centre next to Woodlands Checkpoint, Woodlands Bus Interchange was opened on 29 November 1981 to serve the new regional centre, which contained shops, eateries and a cinema, and was frequented by cross-border workers. The interchange featured 17 berths, and started with five bus services (169, 178, 181, 204, 208).

The bus interchange was planned and built by Singapore Bus Service (SBS), but ownership was taken over by the Government in 1983, and later transferred to the newly-formed Trans-Island Bus Service (TIBS), which gradually took over bus routes in Woodlands in stages between Apr-Oct 1983. Most bus routes were shifted from Marsiling Ter to Woodlands Int, with only a handful remaining at Marsiling, most notably Services 950, 951 and 952, which went to Shenton Way, Jurong and Marina Centre respectively.

When the Government announced plans to extend the North-South Line MRT from Yishun to Choa Chu Kang via Woodlands, there were accelerated plans to relocate and develop a new town centre for Woodlands, to be located at Woodlands Square.

Built at a cost of $34 million, the Woodlands Regional Bus Interchange was built underneath the elevated Woodlands MRT Station, with station facilities occupying the ground floor. This space-maximizing design was the first of its kind in Singapore and could accommodate both articulated and double-deck buses. It opened on 4 February 1996, and Woodlands MRT Station opened less than a week later, on 10 February 1996.

The reorganization of bus routes in Woodlands that accompanied the opening of Woodlands Regional Int led to the disuse of Marsiling Ter, with bus services being extended to the new interchange or withdrawn. As for Woodlands Int, Bus Service 901 remained at Woodlands Int for several more months until its withdrawal on 14 July 1996. Woodlands Int also continued to be used by Bus Service 900, 902 & 904 (later renumbered Intratown 911, 912 & 913 in December 1996) as a looping point, referred to as Woodlands Checkpoint Terminal from bus literature, until 23 March 2003 when the three Intratown services were made to loop at Woodlands Centre Road instead, skipping Woodlands Checkpoint Ter.

While Marsiling Ter was fully demolished, Woodlands Int was used as a car and bus park until late 2017, when the entire Woodlands Town Centre was closed and eventually torn down.

With the construction of the Thomson-East Coast Line (TEL) and a new underground station underneath Woodlands Regional Interchange, the existing interchange had to be closed to facilitate the extensive addition and alteration works, which included a conversion to a fully-air-conditioned concourse, underground linkway to the TEL station, and an expansion of the bus park to accommodate more bus parking. 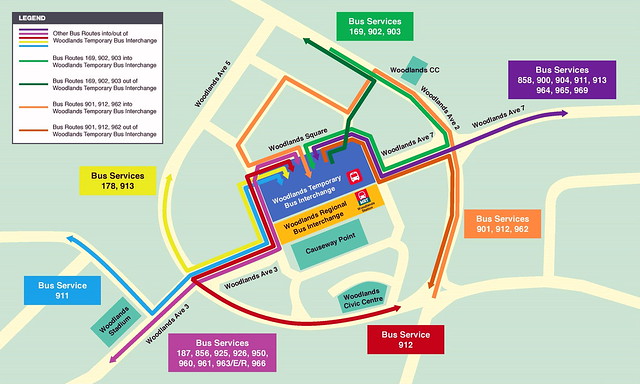 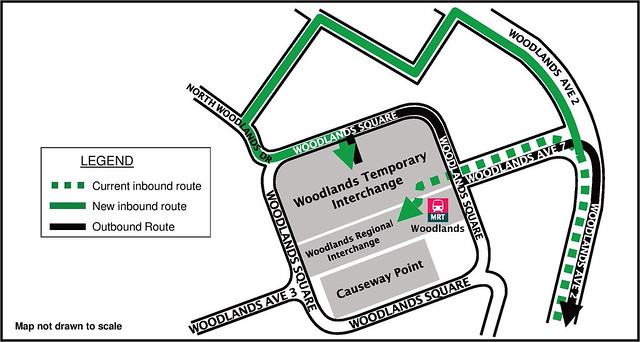 Back to Bus Interchanges and Terminals