Refer to this link for May 2018 Early Closure &  Late Opening of the North South Line.

Shorter operating hours along the entire East West Line (EWL) will take effect on selected days of March 2018 (and 01 April 2018) to facilitate additional engineering hours for re-signalling and maintenance work. This will involve early closures and late openings, along the EWL.

In contrast to January and February arrangements, there are no full-day closures. Other rail lines, including the North South Line (NSL), will not be affected during periods of EWL planned closure.

These closures allow more time for rail maintenance and renewal works to be carried out, as well as checks conducted on the new signalling system. In the wake of the Joo Koon train collision incident in November 2017, old and new signalling system-equipped sections of the EWL are physically separated until resignalling works are complete.

On the first weekend of Early Closure and Late Opening, no shuttle buses were offered between Raffles Place and Bugis.

As a result, train services on the entire East West Line between EW1 Pasir Ris and EW33 Tuas Link, including the Changi Airport Branch Line between EW4CG Tanah Merah and CG2 Changi Airport, will be unavailable during the periods of closure. Train services between Joo Koon and Gul Circle will continue to be suspended (since 20 Nov 2017) until the entire EWL re-signalling works are completed in mid-2018, with bridging buses operating daily. (See also: Partial Suspension of Tuas West Extension Train Services)

More reduced train operating hours are expected in the first half of 2018 to accelerate the resignalling project, and details for subsequent months will be announced by the Land Transport Authority at a later date. The March early closures and late openings are believed to be facilitating CBTC testing along the entire EWL. For a detailed write up on the CBTC resignalling project, check out CBTC Implementation: A review. 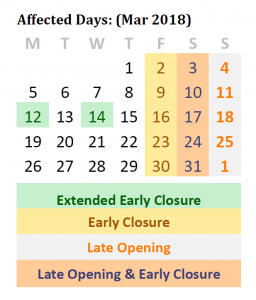 The Free Shuttle Bus Service between Joo Koon & Gul Circle stations will not operate while the MRT Replacement Shuttle buses are in operation.

For Shuttle 3, Woodlands Transport Service Pte Ltd contributed 50 bus drivers as part of Task Force 50, which were roped in to assist with shuttle bus operations. Training and familiarization were carried out by SMRT, and the drivers were assigned to SMRT’s Mercedes-Benz Citaro buses for shuttle operations. These bus drivers were deployed on Shuttle 3.

On days of Extended Early Closure & Early Closure, the last buses for the following residential bus services will be extended to allow commuters to connect from the Shuttle Bus Services.

Back to Bus Services